Siemens has been awarded its first commercial offshore wind order from Finland for which the company will supply, install, and commission 10 wind turbines, each with a capacity of 4 MW and a rotor diameter of 130 meters, for the Tahkoluoto offshore wind farm in the Baltic Sea. The customer is Suomen Hyötytuuli Oy, a wind power producer owned by eight Finnish utilities that is headquartered in Pori. Installation of the wind turbines is scheduled to begin in the summer of 2017 with the start of operations expected by fall of 2017. With a capacity of 40 MW and an annual net power production of more than 155 GWh, the offshore wind power plant will generate enough power to supply 8,600 electrically heated Finnish single-family houses with clean energy. Siemens will also be responsible for servicing the wind turbines.

“This order marks a significant milestone for Siemens,” said Michael Hannibal, CEO of Offshore for the Siemens Wind Power and Renewables Division. “The project is not only the first offshore wind farm in Finland, but will also be used by the Finnish government to demonstrate that offshore wind power is a feasible solution for this area. This project is attracting a great deal of attention throughout the entire Baltic region, and will open doors for Siemens in the emerging offshore markets in this region.”

The Tahkoluoto offshore wind farm is located approximately 0.5 to 3 km from shore in water ranging from 8 to 15 m deep. The wind turbines will be mounted on specially designed, gravity-based steel foundations in order to withstand heavy ice loading. The government of Finland is also contributing €20 million (approximately $22 million) toward the demonstration project in icing conditions.

“The conditions for offshore wind power are excellent in Finland,” said Toni Sulameri, managing director of Suomen Hyötytuuli Oy. “We have a long coastline, windy conditions, shallow waters, and a hard seafloor.”

In 2010, Siemens supplied one wind turbine with a capacity of 2.3 MW to Suomen Hyötytuuli Oy for the Pori pilot project located 1.2 km off the Finnish coast. This pilot turbine will be surrounded by the 10 wind turbines located at the Tahkoluoto wind farm. Siemens has installed more than 5.8 GW of offshore wind power capacity worldwide with 2 GW commissioned in the last fiscal year.

For more information,
go to www.siemens.com/wind. 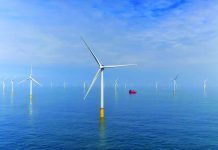