During annual inspections, it’s of paramount importance to inspect foundations every year for cracks as an integral part of proper turbine maintenance.

We all know that the highly engineered foundation is of fundamental importance to the longevity and soundness of a wind-turbine generator. Even so, foundations are all too often overlooked during regular maintenance intervals.

Proper maintenance requires that foundations be inspected annually for cracks in the concrete and grout. Major cracks may be a result of fatigue loads, design problems, or construction errors. These problems should be taken seriously and require analysis and remedial actions. Smaller or superficial cracks can also jeopardize the integrity of the foundation if left unchecked, especially in the winter season. Water can freeze inside the fissures and expand, progressively weakening the foundation. When small cracks are found, they should be filled, if necessary, by injecting grout into them, and the surface of any cracks should be sealed to prevent further water intrusion.

Foundation anchor bolts should also be inspected for potential problems. Unprotected foundation anchor bolts will rust even before construction is complete. Light rust is not harmful, but corrosion must be kept in check. If flakes of rust slough off the face of the nut or washer — where most of the corrosion is found — then pitting of the metal is taking place, and remediation is needed. In some cases, when bolts are left to rust, the nut will seize on the rod, making it difficult to tension. In extreme cases, the nut faces and corners are compromised to the point that the nut is rounded. Severe corrosion of the washer could result in the loss of tension.

Concurrently, water travels between the threads of the rod and the nut, pooling at the bottom of the bolt sleeves and foundation. This might defy common sense. After all, those bolts are tensioned at many thousands of pounds. However, looking at a cross section of the nut and rod, there is a clear path for water to spiral down into the bolt sleeve.

The solution to the problems described is a high-quality anti-corrosion grease and bolt caps. Bolt caps protect the grease on the rod, nut, and washer, which, in turn, protects the bolt from corrosion. They also keep water from traveling under the pedestal. Bolt caps are not intended to protect the foundation anchor bolt itself; they are intended to protect the grease. Without grease, bolt caps will actually accelerate corrosion due to the inevitable condensation in the annulus of the bolt cap.

The importance of proper installation

Proper installation is critical to the performance of bolt caps. When installing bolt caps, they should be firmly seated on the flange but not crushed. The seal at the flange is important to the long-term performance of the cap. A mallet should never be used to drive caps onto the rod, as this will damage the cap. If mechanical means are necessary, use a piece of ABS pipe to drive the cap down, making light downward contact with the shoulder of the cap where it is structurally strong.

Bolt caps will expand and contract with temperature changes. Expansion results in a vacuum inside the cap, which can draw water into the annulus when water pools on the flange. To resolve this issue and allow condensation to escape, a small ventilation hole can be drilled into the side of the cap. Recently, some caps have been designed with ventilation built into them.

A good maintenance program includes pulling a few caps every year, especially on the shady side of the foundation, and inspecting the rods, nuts, and washers for proper grease coverage and corrosion problems. Any damaged or missing bolt caps should be replaced.

While on the subject of grease, it is important to use a high-quality grease that is intended for this application. It should be specifically an anti-corrosion grease with a high dropping point, so it will not dissipate or “melt” off the bolt. Avoid using wax-based greases, as these products generally have a low dropping point and do not provide the corrosion protection required for long term protection. Wax-based grease also tends to string out during application, leaving strings of grease on the tower wall and flange. The grease should cover all of the exposed metal surface on the rod, nut, and washer. It is not necessary to fill the bolt cap with grease, but it should be applied to the rod, nut, and washer as you would a thick coat of paint. Special attention should be given to greasing the nut and washer, as this is the area most vulnerable to corrosion. Grease application tools are available to make the job easier, faster, and more thorough.

In a perfect world, the foundation anchor bolts would be thoroughly greased and protected with undamaged and properly installed bolt caps with no corrosion present. The reality is that we see a lot of corrosion for many reasons. Clearly the reason for the corrosion should be identified and corrected, but the corrosion itself can also be effectively mitigated. Most mechanical methods of removal, such as wire wheels, are hazardous to personnel and can damage the tower wall and flange. It is also difficult to get a wire wheel between the tower wall and the bolt. However, there are tools available to cut the heavy rust off the face of the nuts and top of the washer where most of the corrosion occurs. Chemical treatments have proven to be efficient and effective in resolving issues with light rust by converting iron-oxide or rust to a protective coating of iron-phosphate. Starting with a light coating of rust is actually desirable, since it provides for material to be converted. After treatment and once the bolts are clean and dry, they should be coated with anti-corrosion grease and capped for the renewed longevity and protection for your foundation.

Unfortunately, foundation anchor bolts lose tension over time. Think of them as guitar strings. If the strings do not have the proper tension, the guitar does not perform the way it was meant to. It’s the same with foundation anchor bolts. The foundation loads become out of balance, and fatigue within the foundation can bring expensive and potentially catastrophic results. Most of the relaxation in the rods and creep in the foundation occur early in the life of the foundation. For that reason, it is important to perform a full re-tension after 500 hours of initial operation. After that, many operators perform full re-tensions every five years. However, it is recommended, and often required by the design engineer, to do a tension test every other year to monitor the tension. Normally, 10 percent of the foundation anchor bolts are tested at random for correct tension, both inside the tower and outside. To perform this test, the bolt is tensioned at a predetermined level, generally 10 percent below initial tension. If the nut rotates at all or lifts off of the flange as measured by a feeler gauge, it fails, and all of the bolts on that foundation should be re-tensioned.

As early projects grow older and technology advances, many owners are opting to re-power wind farms to increase power output and reduce operating costs. This is the ideal time to inspect the foundation for damage, remove the bolt caps, clean the bolts, re-tension them, and apply new grease and caps. 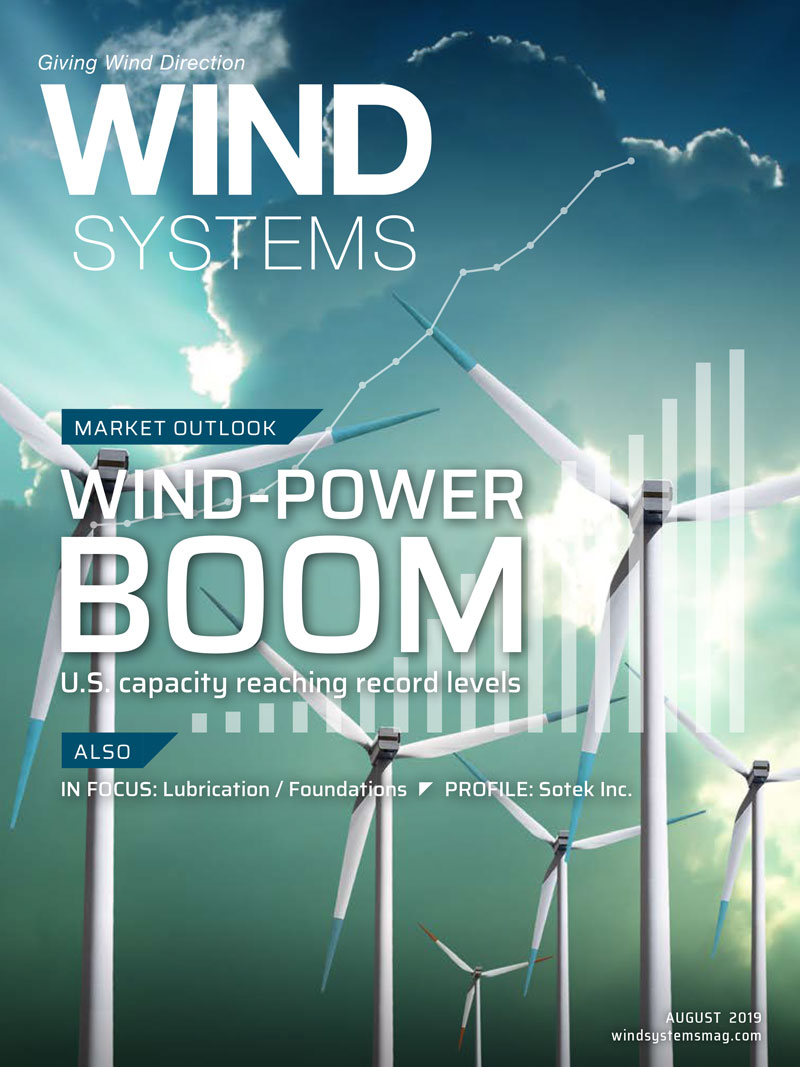 A Bolt of Knowledge