Home inFocus The Power of Data

Real-time data collection is being used to optimize turbine performance and profitability.

The operations and maintenance of wind farms is experiencing a renaissance.

Apex Clean Energy, based in Charlottesville, Virginia, is going “all-in” on the power of data to fundamentally improve the performance, efficiency, parts life, and reliability of more than 1,700 MW of installed capacity for its asset management clients.

The process starts in a purpose-built, NERC-certified Remote Operations Control Center (ROCC), staffed 24 hours a day, 365 days per year. A first-tier software and proprietary network topology allows the ROCC operators full visibility and detailed access to each wind and solar asset under management.

Each day, these systems perform more than 1.6 billion scans of more than 58,000 data points with an average data pull every three seconds. The internally-coded advanced compression algorithm makes a history of about 250 million data points per day of high-resolution data that fuels advanced performance analytics and predictive failure analysis.

In simpler terms, these data points are sorted, prioritized, and analyzed to allow for real-time adjustments to maximize generation and revenues and minimize turbine downtime.

It’s a glimpse of the future, in action today.

From Reactive to Proactive

Optimal performance and increased asset reliability and availability are two common goals among asset management teams across the wind industry. Unfortunately, many wind-farm operators are addressing these goals through a reactive strategy — that is, they are using only historical data to optimize assets for increased reliability.

This approach is typically used to address performance or reliability issues in response to asset failure or on prescribed calendar-based intervals and is not suitable for an entire class of assets given the particularities of the wind industry (i.e., varying environmental conditions from site to site, assets subject to different loads even at the same site, and so on).

Apex has implemented two platforms to address turbine and site

performance optimization and turbine life cycle reliability and availability. Both platforms were developed in accordance with the MIMOSA standards for operations and maintenance in manufacturing, fleet, and facility environments. There are six blocks of functionality in a condition-based monitoring system: data acquisition, data manipulation, state detection, diagnostics assessment, prognostics assessment, and advisory generation. Both of the Apex platforms address all six blocks of functionality.

The Apex turbine performance and site performance optimization calculation engine is able to detect, in real time, deviations from nominal performance curves as well as from site averages. In addition, a set of engineering-based “crisp” rules — used with data-driven techniques — is employed to identify the underlying cause of underperforming turbines. Once such a turbine or site is identified as underperforming, a work order is opened in the Apex CMMS to be addressed by plant operations and site maintenance teams. Data compiled during troubleshooting activities is collected into a knowledge database that helps with future recommendations.

The Apex turbine reliability and availability platform is focusing on optimizing each asset’s remaining useful life (RUL) based on historic, current, and future asset operations. Current RUL is based on historical operating conditions and can be estimated as total accumulated damage (fatigue and extreme events) to a turbine major component. Future reliability and availability is then improved based on smart anomaly detection and improved asset management processes.

Overall, wind energy asset management is about maximizing wind-power generation and profits over the long-term, and Apex is achieving significant results. It’s about more than revenue, though. It’s about keeping people safe, working with the local communities, and helping promote the power of clean, reliable wind energy.

Wind turbines are at increased risk of lightning strikes, and early damage detection is a crucial cost-saving measure. One case study of the power of real-time analytics is managing these scenarios.

Recovering from lightning damage on wind farms has historically been both time consuming and costly. Site operators are often faced with the decision to perform a site-wide inspection after each storm or risk waiting until the end of lightning season to do a thorough inspection for damage.

If an inspection is performed after every storm, site availability will suffer — personnel cannot address faulty turbines in a timely fashion, and costs increase if outside technicians are brought in. If inspections are postponed until the end of lightning season, damage to blades may have propagated by that time, and repair costs will rise significantly in turn.

To highlight the difficulty in this trade-off:

Sites managed by Apex’s Asset Management team are monitored by the internally developed lightning monitoring system ApexDetect. Every lightning strike within the borders of an Apex-operated wind farm is processed in real-time to determine whether the lightning was within the likely strike zone for each turbine.

A database of likely lightning strikes to turbines — including the strike magnitude and direction — feeds automatic reports for site management following a storm, as well as an online tool that maps out the location of each relevant strike in relation to turbines at the site.

After a storm, site managers are able to do a targeted inspection of only the turbines struck by lightning. This ensures lightning damage is caught and repaired immediately to minimize repair costs and avoids unnecessary inspections being performed.

In 2015, a turbine at an Apex-managed wind farm was struck by lightning. Using the ApexDetect tool and process, the damage was detected immediately after the strike. The lightning had caused visible but small damage to the blade shell.

There was no auditory signature to the failure, so it is unlikely the damage would have been detected without an inspection. And although the visible damage was small, the lightning had in fact caused internal structural damage to the blade.

Immediate detection using ApexDetect and a timely repair prevented complete blade failure and a cost savings to the project of $300,000. 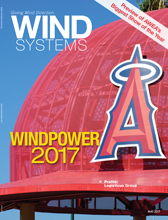 With the increase in megawatt output, turbines and associated components pose maintenance challenges

Simulation: A Shift and Advancement in Wind Energy Training Methods