The Carbon Trust recently announced the start of the world’s largest trial of scanning light detection and ranging (LiDAR) technology taking place in Dublin Bay, Ireland. This is the latest offshore wind accelerator (OWA) project designed to help reduce the cost of energy from offshore wind.

Over the next three months, the most comprehensive test of scanning LiDAR technology will take place where four different scanning LiDAR systems will be put through their paces alongside three vertical profiling LiDARs for validation purposes. The project is being supported by the independent renewable energy company Renewable Energy Systems (RES) and the maritime safety organization Commissioners of Irish Lights.

Accurate wind resource measurements are critical to wind farm development because they are used to calculate the potential energy yield from a wind farm, which dictates the terms of the project financing. This can be a significant proportion of the overall project cost, accounting for around 45 percent for an average wind farm.
Scanning LiDAR is not a new technology. Conventionally, it is used by the defense and aerospace industries to monitor for oncoming weather fronts, but it doesn’t have a proven track record in offshore wind.

The OWA project has been working for the past few years to support more cost effective solutions and focusing on the development and commercialization of a number of floating LiDAR systems to significantly reduce upfront capital expenditure. However, measurements taken by both masts, and floating LiDAR are limited in that they only provide a measurement of the wind resource at a single point in space. For an offshore wind farm covering an area of up to 200 km2, this can create uncertainty on the wind speed at locations far from the measurement point. This is known as spatial variation, where measurements may not be representative of the entire site. It is translated into risk incurring additional financing costs to wind farm development.

Scanning LiDAR technology has the potential to reduce the risk associated with spatial variation. These systems are capable of scanning with a usable range of between 10 to 30 km, to impressive levels of detail, taking over 100 measurements per minute. This allows developers to build a much more detailed picture of a site, not only significantly reducing uncertainty of spatial variation, but also allowing developers to better plan the layouts of the turbines to best exploit the individual wind conditions at the site. Increasing confidence on spatial variation could reduce risk to minimal levels, potentially saving money on a project and reducing the cost of energy from offshore wind.

A difference of only 0.2 mph in wind speed can result in significant variation of yield calculations over the lifetime of a wind farm. Therefore, it is critical that the industry has confidence in scanning LiDAR devices being sensitive enough to detect such small variations. The OWA trial aims to test the sensitivity of the devices to picking up these variations in wind resource.

“Many factors can impact available wind resources at a potential wind farm site, including its proximity to shore, neighboring wind farms, and as a result of tidal currents,” said Megan Smith, project manager for Wakes Research at the Carbon Trust. “This project forms a really important stage of the OWA’s efforts to increase the industry’s understanding of wind resource measurement and validate the technologies capable of delivering results. Project financing is a significant proportion of cost, so anything we can do to get a deeper understanding of yield will increase investor confidence and lower the cost of financing. Scanning LiDAR has the potential to take our understanding to a completely new level. It is the difference between taking a still photo compared to having a 3-D video with full sound. The need to test the sensitivity of the technology is the next frontier in getting industry acceptance.”

The Leosphere windcube 400s will be installed at the Baily lighthouse on the north side of Dublin Bay.

For more information,
go to www.carbontrust.com. 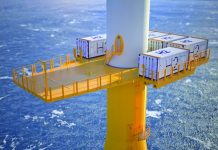 The Current State of Energy Technology

Iberdrola Once Again Included in the Dow Jones Sustainability Index

Want a Tax Credit for a Small Wind System? Be Sure Itâs Certified