The first quarter of 2019 boasts a record of more than 39,000 MW of wind-energy capacity either under construction or in the planning stages.

American wind power has seen a consistent string of strong years and so far, 2019 is proving to be no exception. In fact, in the first quarter of this year, the volume of U.S. wind-power capacity under construction and in development reached a record level. The American Wind Energy Association’s (AWEA) U.S. Wind Industry First Quarter 2019 Market Report revealed that U.S. wind pipeline grew to a record-breaking 39,161 MW, an 11 percent increase over the previous quarter. That is nearly the equivalent of the current total wind capacity of Texas, Iowa, and California combined.

Of the total pipeline, 17,213 MW were under construction across 21 states. Texas continues to show its renewable energy potential with more than 6,528 MW under construction, 1,255 MW of which started going up in 2019. The remaining 21,949 MW of wind capacity in the pipeline is in an advanced stage of development. Projects classified as in advanced development either secured a long-term contract for offtake, placed turbine orders, or are proceeding under utility ownership. While construction has not begun on these projects, it is likely to begin in the near-term.

In the first quarter of 2019, 841 MW of wind capacity came online. This is a 107-percent increase over the first quarter of 2018 and continues the robust growth trend the industry has seen in recent years. Iowa leads this growth with more than 536 MW brought online so far this year. With the new projects added in the first quarter, the United States’ total installed capacity climbed to a record 97,223 MW. That’s enough to power the equivalent of 30 million homes. Currently, eight states are on track to double their installed wind capacity in the near-term. Another 14 states have enough capacity to grow their total installations by 50 percent or more.

Strong construction and development numbers show high demand for American wind power. 2018 was a record-setting year for corporate wind purchasing as calls from customers for affordable, clean energy grew. A recent study by consulting firm Deloitte found about 67 percent of businesses reported getting pressure from customers to transition powering their operations to renewable energy. As a result, more companies are publicizing their renewable purchases with 72 percent reporting their wind and solar contracts. This has provided businesses with the opportunity to directly respond to their customers’ desires.

“As a leading brewer, Anheuser-Busch understands sustainability is not just related to our business, it is our business,” said Angie Slaughter, vice president of Sustainability at Anheuser-Busch. “We are proud that Budweiser is the first major beer brand to be brewed with 100 percent renewable electricity from wind power; we hope our efforts inspire others in our pursuit for a more sustainable future.”

But good press and sustainability are not the only benefits American businesses are receiving. Since 2009, the cost of wind has fallen 69 percent. In many parts of the United States, wind power is now the cheapest source of new electricity. That is why many companies are choosing to enter long-term contracts to buy wind. Long-term contracts like power purchase agreements (PPAs) and other arrangements allow businesses to secure reliable, renewable energy at a low, fixed cost. Because costs are fixed, businesses can better plan financially and are insolated from spikes in fuel prices.

“The U.S. has amazing wind and sun resources that will never run out,” an IKEA official said while announcing its investment in the Illinois Hoopeston Wind Project. “We invest in our own renewable energy sources so that we can control our exposure to fluctuating electricity costs.”

In 2018 alone, commercial and industrial (C&I) customers signed more than 4,203 MW worth of wind deals. That’s 66 percent more than the previous record set in 2015. It is clear American businesses and non-utility buyers such as municipalities and universities value the price stability, low costs, and environmental benefits wind power delivers.

Data from the Business Renewables Center shows wind provides more energy to corporate brands than any other renewable source. In fact, many popular household brands have added wind to their energy portfolio. Last year, a mix of repeat buyers such as Facebook, Walmart, and Microsoft, along with first-time buyers such as AT&T, Shell Energy, Boston University, and Royal Caribbean Cruise Lines secured long-term contracts for wind power.
As time goes on and more businesses grow comfortable with wind investments, expect to hear more companies talking about how buying wind helps their bottom line.

“When looking at wind deals, cost savings are one attribute I can bring up when I talk to our finance and accounting department,” said Rob Threlkeld, general manager of Renewable Energy at General Motors. “Have you ever seen your electric bill go down for multiple years at a time?”

Technological progress and wind-related R&D are helping open new frontiers for the industry. One area that boasts enormous potential is offshore. Three years since “first power” at America’s first offshore wind farm near Block Island, the country’s offshore sector is bullish. Currently, the U.S. boasts an offshore wind potential of more than 2,000 GW. Nearly 25,700 MW are already in the pipeline across 10 states.

The proliferation of offshore wind looks promising from the Atlantic to the Pacific and the Great Lakes in between. The prospect of thousands of new jobs and billions in investment creates fierce but friendly competition between states for an advantage. In May, Maryland adopted the Clean Energy Jobs Act, which included plans for developing more than 1,200 MW of wind off the coast. A hundred miles north, New York Gov. Andrew Cuomo announced his intention to triple the state’s offshore wind target to 9 GW by 2035. Less than six months later, the New York legislature agreed and codified the target.

As states are setting ambitious future targets, several states are well on their way to putting steel in the water. This June, New Jersey regulators announced it selected Ørsted to develop a 1,100-MW offshore wind project off the coast of Atlantic City. This was a major leap forward toward achieving Gov. Phil Murphy’s goal of installing 3,500 MW by 2030. It also shows states are eager to see their plans through. 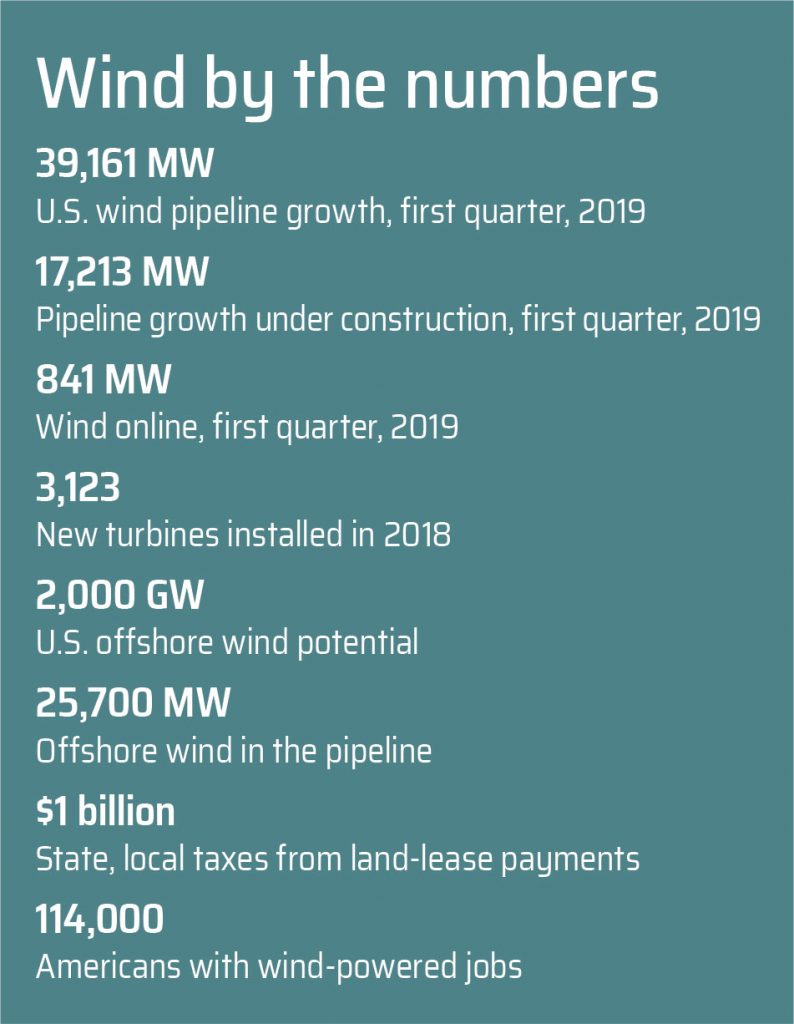 “I really am having difficulty grasping the reality of the moment,” reflected Board of Public Utilities President Joseph Fiordaliso. “After so many years, New Jersey is going to finally be open for business as far as offshore wind is concerned.”

As the offshore wind sector readies for rapid deployment and job growth in the coming years, back on land, wind power is continuing to deliver economic and environmental benefits to communities across the country. The enormous pool of benefits from jobs to investment will only grow as the country’s wind fleet blooms.

In 2018 alone, the U.S. wind industry paid out more than $1 billion in state and local taxes and land lease payments. This additional revenue allows states and municipalities to invest in their infrastructure, fund education programs, and support public services. The quarter of a billion dollars paid to farmers and ranchers in land-lease payments provide financial stability for many. Hosting wind turbines provides them with a hedge against poor crop yields and fluctuating commodity prices.

More than 114,000 Americans across 50 states now have wind-powered jobs. Jobs range from manufacturing at one of the more than 500 U.S.-based wind-related facilities to climbing the towers as a wind tech and many roles in between. According to the Bureau of Labor Statistics, wind technician is the second-fastest growing job in the United States, second only to solar installers. These quality jobs are in rural and low-income areas, where 99 percent of America’s wind fleet stands. New employment opportunities are providing an avenue for families and communities to stay together instead of moving in search of work.

Access to abundant, low-cost renewable energy is an incentive for businesses to set up shop in rural communities. This gives states with strong wind resources a competitive advantage. For example, Facebook recently opened its new Papillion data center in Sarpy County, Nebraska. The location was perfect because the company committed to 100 percent renewable energy for its data centers. The facility represents more than $1 billion in investment and will create more than 200 jobs.

“Getting a high-profile company like Facebook, which is just a really world-class company, really demonstrates that Nebraska is a place to invest; that companies want to come here because we’ve got great people that they can hire,” Gov. Pete Ricketts told The World-Herald. “We’ve got a business-friendly environment.”

Nebraska is not alone. Just across the Missouri River in Iowa, which boasts the second highest percentage of in-state energy generation from wind in the country, similar stories are playing out, and the state’s leaders are noticing.

Wind is innovating and collaborating

There is no doubt of wind’s success in recent years. U.S. wind power’s future is bright as technology advances, new frontiers for development open, and collaboration with partners such as solar and storage increases. Like wind energy, solar and storage technologies bring advantages and unique properties that create value for consumers and the grid. As the industry becomes more “multi-tech,” the opportunities for growth multiply.

As companies rapidly diversify their portfolios to include all three of these renewable technologies, among others, the American Wind Energy Association is meeting the growing demand for collaboration. During the WINDPOWER 2019 Exhibition and Conference, AWEA CEO Tom Kiernan announced future WINDPOWER shows will be housed within a new CLEANPOWER exhibition hub. The new hub will bring together utility-scale wind power, solar power, and energy-storage industries to create a more efficient and valuable experience for attendees who are working more in multi-technology businesses. AWEA’s first CLEANPOWER will launch June 1-4, 2020 in Denver and marks an exciting step in the right direction for the U.S. wind industry.

Technical inspections of wind turbine generators — a necessity, not an option

Bolting Technology for the New Year